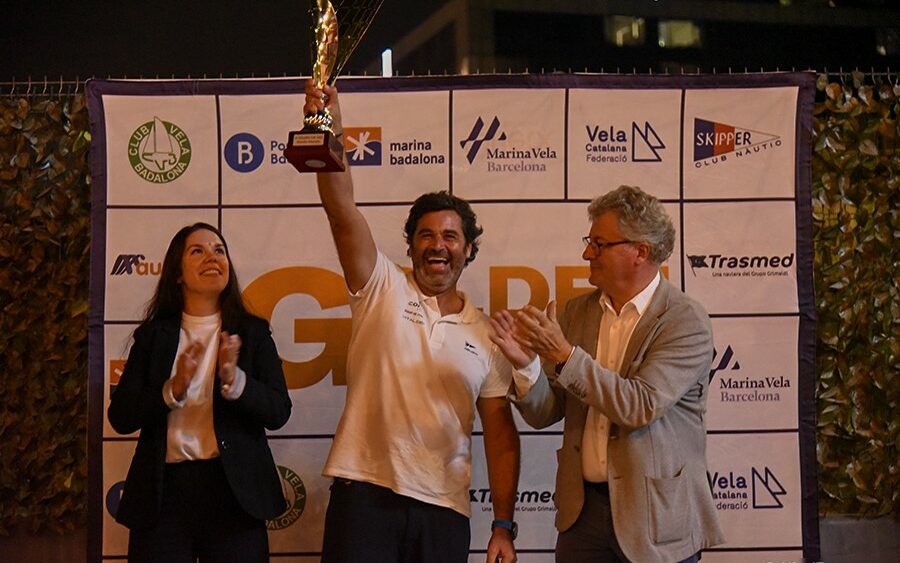 Badalona successfully passes the IV edition of the GOLDEN CUP 2022, with absolute triumph of the Cometa- X35 of Luis Blanchar

The final podium of the Golden Cup trophy ends with the Comet, X-35, of Luis Blanchar as absolute winner of the IV edition of the Golden Cup, in which Marina Badalona has joined Marina Vela as the venue of the race and the new format of two tests has been inaugurated.  The Hydra, HM Hospitales, DK 46 of Oscar Chaves, was in second position and the Yellow Rose, X-45 of Marten Jan Ringers, in third complete the palmares.

The success of the new format

On Friday 28, Saturday 29 and Sunday 30 October 2022, the IV edition of the GOLDEN CUP race was held, inaugurating the new format of two events: the TROFEO MARINA BADALONA, a long regatta of 60 nautical miles, and the TROFEO MARINA VELA BARCELONA, a short regatta of 15 miles off the coasts of Badalona and Barcelona. Despite the complicated weather conditions derived from the weakness of the prevailing winds this weekend, both tests have finally been held and the new format has been revealed a success in its combination of sea trials open to expert and novice sailors, as well as a large program of events on land enhancing the social dimension, thanks to the incorporation of Marina Badalona as the second venue of the regatta.

On Friday 28 the first test was held, the  TROFEO MARINA BADALONA, with a clear dominator the Hydra HM Hospitales, DK 46 of Oscar Chaves, winner of the last editions of the Copa del Rey. Later, on Saturday, all participants were able to share their experiences at the trophy ceremony and food for all crews held at the Hotel Marina Badalona with the presence of authorities of the City Council of Badalona. On Sunday the second test was held, the TROFEO MARINA VELA BARCELONA, which due to the lack of wind, had a shortened route of four and a half miles. The Comet, X-35 of Lluís Blanchar, won the victory. The results in this second test were decisive to establish the general classification of the IV GOLDEN CUP.

With the boat Ketch Ciutat de Badalona as a luxury witness, at 4:52 p.m. on the afternoon of Friday, October 28, the FIRST TEST of the GOLDEN CUP was launched: the TROFEO MARINA BADALONA . In view of the weather report, the Race Committee chose the option of the southern route: Badalona-Vilanova i la Geltrú-Badalona, to total 58.5 nautical miles, WIith weak winds of 4-5 knots from the east and after overcoming a demarcation buoy in front of Marina Badalona, the boats hoisted their asymmetrical sails and spinnakers heading south.

The Hydra HM Hospitales, after a few minutes of midnight, was the first ship to turn the buoy of Vilanova i la Geltrú, followed by the Korrigan and the Comet. In the return section, with bow winds, the fleet remained relatively united until the mouth of the port of Barcelona, where the Hydra HM Hospitals hit a series of boards to escape from the rest of the competitors and clearly impose itself crossing the finish line in front of Marina Badalona at 5:38:02 in the morning of Saturday, October 29.

On Saturday, October, 29,  the ceremony of TROFEOS MARINA BADALONA was held at the Hotel Marina Badalona Barcelona Coast, to the Port.

Imanol Sanz, Manager of Marina Badalona, opened the event as host of the event, thanking all the crew for their participation in the event, highlighting the interest of the Navy in enhancing its character as a port of reception of major sporting events.

Christian Carneado, councilor of the City Council of Badalona and member of the board of directors of the Port of Badalona, also dedicated a few words to the attendees to celebrate the opening of Badalona to the sea with the great transformation that this municipality is carrying out on its coast.

Ramon Badia, president of the Badalona Sailing Club, spoke on behalf of the entity, encouraging sailors to participate in the numerous social regattas organized by the Badalona sailing club.  The ceremony was also attended by Joan Balaguer representing the Catalan Sailing Federation and the Cruise Committee.

Prizes were awarded to the winners of the TROFEO MARINA BADALONA of the various categories:

It was planned that the second round of the GOLDEN CUP: the  TROFEO MARINA VELA would consist of a circuit of 15 nautical miles, of three sections, between Badalona and Barcelona.However, given the weather report for Sunday, October 30, which pointed to extremely weak winds of between 3 and 5 knots of intensity, the Race Committee decided to cut the route to only one direct section Badalona-Barcelona to total 4.7 nautical miles. The fleet, accompanied again by the flagship Ketch Ciutat de Badalona, had to wait at sea for almost an hour to establish the minimum wind conditions to start. Finally, around 2 pm on Sunday, October 30, the starting gun took place with a wind of 3-4 knots of intensity. The easterly wind allowed the boats to hoist the asymmetrical sails and spinnakers to cover the route with a good speed despite the low intensity of the breeze. Luis Blanchar’s Comet was the ship that best knew how to take advantage of the prevailing conditions, crossing the finish line in little more of one hour with the largest boats of the fleet, to clearly prevail in the test.

The ceremony of the TROFEO MARINA VELA BARCELONA took place on the afternoon of Sunday 28. Enny Ozbolt, Commercial Director and Marc Oller, Petty Officer, were in charge of delivering the trophies to the winners of each category on behalf of Marina Vela Barcelona.

The winners of the TROVEO MARINA VELA BARCELONA  in the various categories were:

– 1st classified in category A2: Comet, X-35 of Lluís Blanchar of the Club Náutico El Balís

After the delivery of the TROFEO MARINA VELA BARCELONA the TROFEO GOLDEN CUP ceremony took place, in which, the representatives of Marina Vela, were joined by Imanol Sanz, manager, and Eva M. Gómez, director of marketing and communication, of Marina Badalona, as well as Meritxell Cornudella, representing the Catalan Sailing Federation, and Ramon Badia, president of the Badalona Sailing Club.

In this new format, the final classifications of the GOLDEN CUP were elaborated by combining the results obtained by each of the participants in the two tests carried out, applying a coefficient of 1.5 to the first test, since it was a longer route.

– 1st classified in category A2: Comet, X-35 of Lluís Blanchar of the Club Náutico EL Balís

Finally, the TROFEO GOLDEN CUP were presented to the first classified of the absolute general, which integrates the boats of all categories. The final podium of the Absolute General of the IV GOLDEN CUP was composed of:

Enrique Curt, President of the Skipper Yacht Club, promoter of the regatta together with Difusión Náutica, closed the event thanking all the teams for their participation, as well as the support of Marina Vela and Marina Badalona. He celebrated the success of the new format and predicted a promising future for it, as an unifying event for experienced and novice sailors, with a proposal for sea tours and events on land designed to bring together all lovers of the sea.